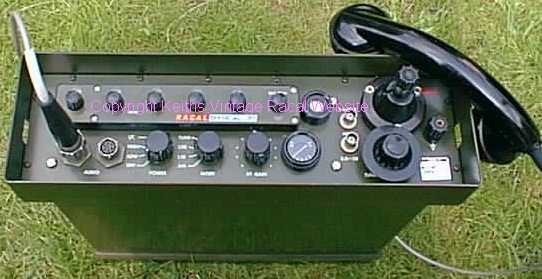 The Syncal30 is also known as the TRA931. As Racal refer to it in their part number catalogue as the "TRA931" I shall also refer to it as such.

On the RA17 page I used to have the comment that "this was the receiver that made Racal". I have been corrected by Keith Thrower that while the RA17 was a most successful product it was, in fact, the TRA931 that actually "Made Racal", it being sold by the "Tens of Thousands"

The TRA931 can be looked upon as "HF in a box" , and quite a small box at that. The dimensions ,less battery pack ,are as follows.....

The radio's weight is 5kgs (11lbs) in the basic configuration, although this increases to 11kgs (24lbs) with the battery pack,manpack, and whip antenna. Certainly if you were to go out portable for the day, the weight of the radio, any mast or antenna,possibly a spare battery, and of course your flask of tea and sandwiches, would limit how far off the beaten track you would go.

The 931 has a large number of accessories for it. Some of these enable it to be operated mounted in vehicles, while others are for use with Linear Amplifiers in a less mobile "static" setup. There are battery chargers , mains PSU's , audio amplifiers available, all of which enhance its operational use. As you have probably already seen on this site, Racal were not slow in producing "optional extras" for all of their kit.

It is usually a measure of how good a set is by how well it sells .To quote Keith Thrower "In fact it was a most successful radio and was sold in tens of thousands." Indeed the basic design for the synthesizer was Keith's and the division of Racal that developed the unit was under his direct control.

The 931 is a versatile HF Transceiver that operates over the range of 1.6-29.999 MHZ,although the RX section works well down into LongWave with much reduced performance. Operating modes are USB,LSB,AM, and CW. CW though is by means of a keyed 1khz tone( A2). RF output power is around 20 W pep on SSB and CW and about 5 W on low power setting .Current consumption is about 4 amps (continuous) on transmit high power, and 250ma on receive (appx).The whole unit is mounted in a high impact plastic case and is waterproof. The front panel is of steel construction. The 931 has been designed to withstand very rough use.Frequency changing is by 5 decade switches which take you down to 1 khz resolution. A sixth knob , marked "Search" for some reason, gives continuous tuning between the 1 khz setting.There are 2 sockets on the front panel which give access to Mic,Phones,Key, Audio,DC Power etc.There are three knobs, one for Power on/off, low & high RF power and intercom, another for Mode and the last for AF Gain.A small meter (indicator) shows battery voltage on RX and RF current on TX.There are 2 BNC's for 1.6-3 MHZ and 3-30MHZ 50 ohm RF output. A whip socket is also provided and ,is somewhat in the way of, the knob for tuning the inbuilt ATU. Finally there is a connector for earthing the radio.

The set is made up of 2 major units. The transceiver unit type MA930 and the Synthesizer type MA 925.

The transceiver unit MA930 sits on one side of the chassis and the synthesizer ,MA925 ,the other.Both units are hinged to allow for easy access to the underside of the board for servicing. Both these units have covers over them , which need to be removed to gain service access to the board . On one end of the chassis the PA is mounted in a screened compartment and the ATU assembly fits over this. To get to the PA for servicing the ATU has to be removed.

The differences between the 931 and the 931X/Y are small but significant. The differences are obvious by looking at the control panel, the X/Y sets have four BNC sockets fitted.Two of these are for the 1.6-3 Mhz and 3-30 Mhz antenna connection, like the other sets, but the other two are for 'Wideband" and 'ATU' use.

Wideband is used for output to devices such as the TA940B Linear Amplifier where it supplies a fixed low power source to drive the amplifier.This source by-passes the built in ATU .Remote ATU's such as the BCC545 can also be used in this way.Using 'wideband' I have found the set works very well down to Longwave on receive..

ATU seems to be used for linking back through external filter units. The set automatically senses what connector is in use so manual switching is not required. As you can see these alterations are slight but they do make the set far more flexible to use with other units. 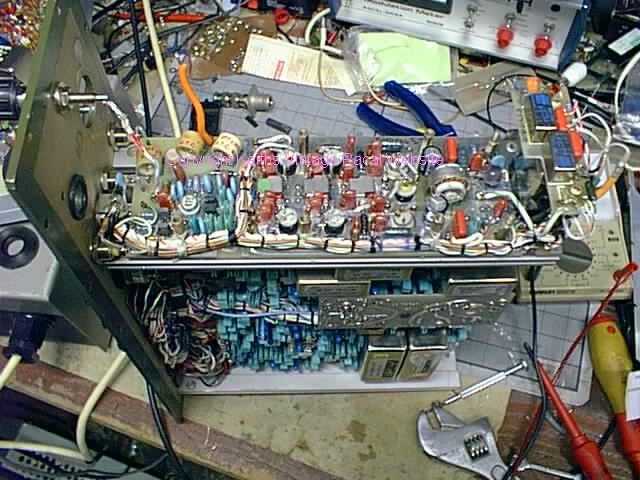 The view above left shows not only my gloriously untidy shack but also the PA Unit which is usually hidden under the ATU assembly, to the right is the ATU section in place and beyond, just visible at the top ,is the switching and "Fixed Audio" board.

The TRA931 is in use with a large number of armed forces around the world.As it is a very versatile set it can be found in many branches of the services.According to the manual which came with one set it was used with the British Diplomatic Service.( the manual anyway, if not the radio..!)

Because of the type of use it may be put to it has to be simple to operate. Well Racal have made a very good job of simple..! You switch on, select frequency, select mode and tune the ATU.Thats it.

The ATU tuning knob is very close to the whip socket, so if you are not careful you will get RF burns if your fingers come into contact with the socket while tuning.Whilst on the subject of the ATU there are 2 small lights on the RF indicator, one to the left and one on the right.When the Mode switch is set to tune, one of these lights will illuminate if the antenna is not matched to 50 ohm.All you have to do is turn the ATU knob in the direction of the lamp until it goes out and then peak the meter for Max antenna current. So you can see that a separate VSWR meter is not really needed.

The 931 can be used with a set mounted whip or an end fed connected to the whip socket.Resonant antennas such as dipole's can be used , connected to the BNC sockets. Because of its intended field/tactical use it seems that Racal have included a lot more information into the manual for this set.There are a number of diagrams for antenna setups and detailed information on setting up such aerials as Whips,Vertical Dipoles,End Feds,Slant Dipoles, Horizontal Dipoles and Inverted V Dipoles.There is also a section on substituting transistor types. All in all one of the more detailed manuals.

This radio is a great to take out portable, it is very stable and with only 20W and a 33ft end fed contacts in the UK and nearer parts of Europe are easy on 20 & 40 meters during the day.A short earth or, more effectively, counterpoise is essential , unless you like talking to yourself. 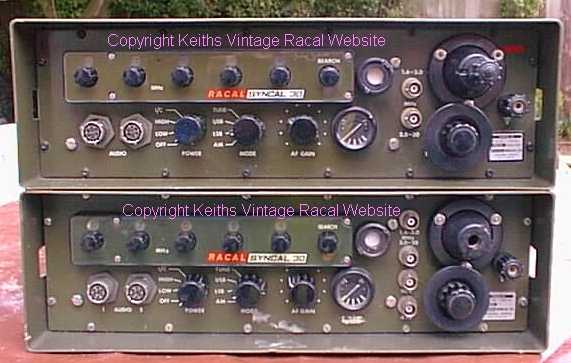 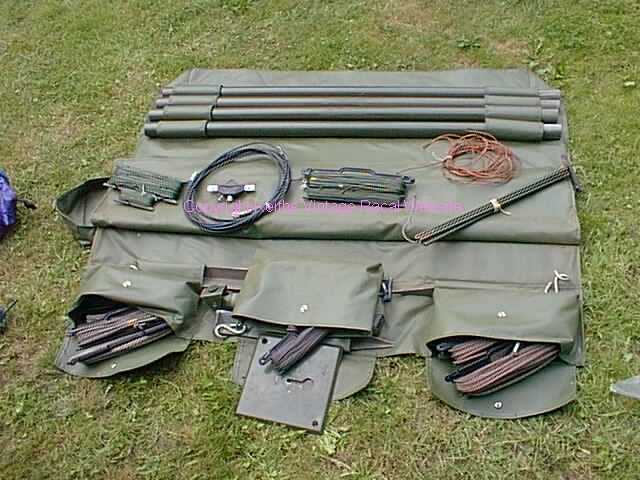 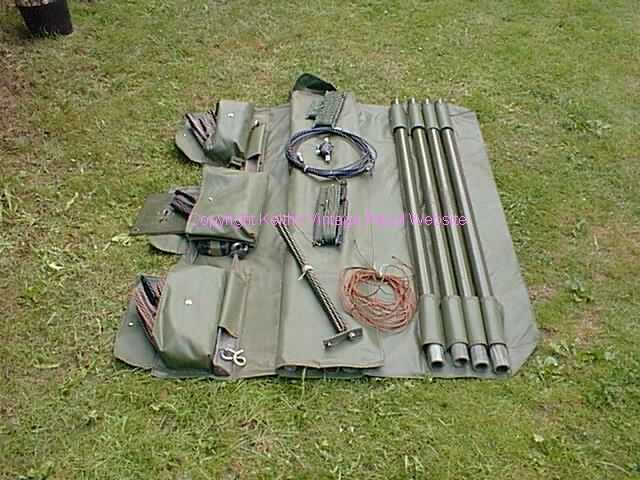 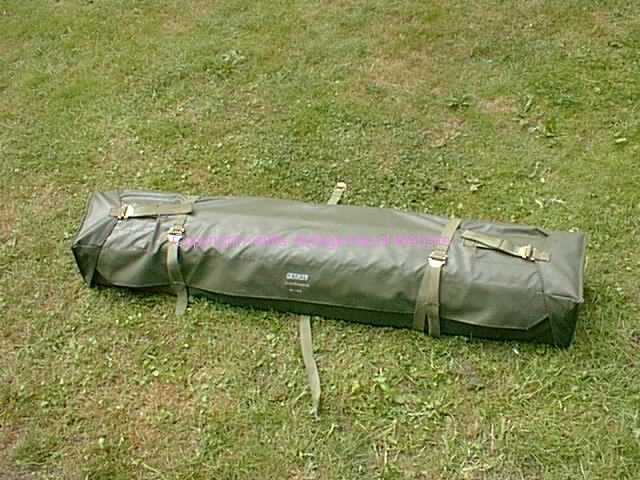 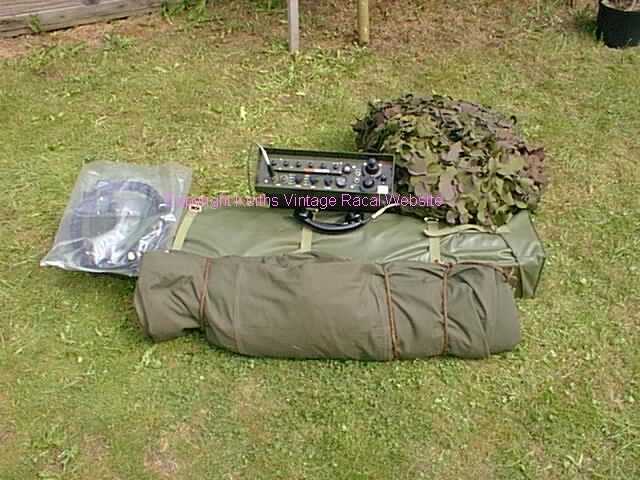 Things to look out for.

The gold plated wire on the ATU can become frayed or broken and I think that this may be a problem to repair. I have also been told that the PA transistors are difficult to find. If this is the case then keep clear of one that has low output.The the beta emitter lights that are behind the dials may be exhausted by now.One of my sets has LED's fitted, I don't know if it was made this way or if it had been modified, but it does prove to be very useful.

Everything else should be straight forward (!)

I love this radio. Yes you can go out and buy an FT817 which is much smaller and has more frequency coverage, but...You can add a "proper" antenna with this set and not have to use the attenuator ( just as well really as there is not one fitted). You can drop it and it will still work ( and be in one piece) you can even try to teach it to swim, and it will still work

20 Watts is a good compromise between battery life and useful power output. 24V is not a problem when using the Ni Cad pack (obviously) but it does mean that to use the set from a vehicle's supply a convertor is required (MA937). Unless , of course ,you go for a good old Land Rover FFR..! I have seen spare battery packs from time to time, but be warned they take 19 D cells , expensive..!. A cheaper option is possibly a couple of 12V sealed lead acid batteries,fed into the set from the front panel.You could possibly incorporate a couple of these batteries into the original Ni Cad package but if so beware of trying to charge the pack through the radio.This facility is not intended to be used with lead acid batteries.

Frequent changes of frequency can become tedious , or impossible if you are genuinely mobile.If you wish to use the set with a loud speaker or separate microphone, a little bit of ingenuity will be required, unless you stumble across the correct Racal units designed for this.

All in all an excellent bit of kit which will, in years to come , I am sure, become yet another Racal classic.

** Note. although Racal list the TRA931P as above it has also been listed as having a frequency range of 1.6-30 Mhz and 8 programmed channels using an MA4008 encoder unit.

Return to top of page.

Back to Mobical main page